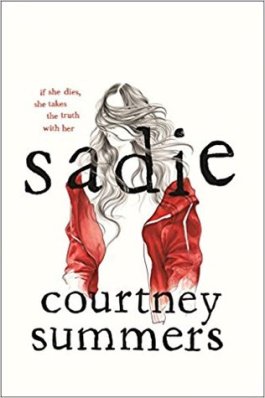 Sadie hasn’t had an easy life. Growing up on her own, she’s been raising her sister Mattie in an isolated small town, trying her best to provide a normal life and keep their heads above water.

But when Mattie is found dead, Sadie’s entire world crumbles. After a somewhat botched police investigation, Sadie is determined to bring her sister’s killer to justice and hits the road following a few meagre clues to find him.

When West McCray—a radio personality working on a segment about small, forgotten towns in America—overhears Sadie’s story at a local gas station, he becomes obsessed with finding the missing girl. He starts his own podcast as he tracks Sadie’s journey, trying to figure out what happened, hoping to find her before it’s too late.

I got an ARC copy of Sadie at YALC in July, and I started reading it immediately. It was one of my most anticipated reads of the year, since Courtney Summer’s previous book All the Rage ended up being one of my favorite reads. I’m so glad to say I wasn’t left disappointed. This book is absolutely incredible. Let me tell you why.

There are two parts to this story.

In one, we follow Sadie as she searches for the man she believes killed her little sister, so she can kill him. She leaves her small little town and the trailer she lives in behind, buys a car and starts her search. She tells no one about her mission.

The different formats make for a very interesting read. As Sadie didn’t tell anyone she was leaving, at first the people assume she was kidnapped or just ran away because she couldn’t deal with losing her sister. The podcast aspect also explores the idea that we are weirdly (and somewhat inappropriately) obsessed with true crime and stories of disappearing and dead women.

I feel like there are a lot of trigger warnings for this book: substance abuse, addiction, sexual abuse, and more. However, what Courtney Summers did so well is that these things don’t actually happen on page. You know that they happen(ed) to the characters in the book, and you see their lasting trauma and how it changed them. But you don’t actually witness it. You can still see the impact they left on the people without needing to be confronted with them yourself. They aren’t used as plot twists or to leave you shocked, instead they are just part of the characters’ stories. In my opinion, this is utterly brilliant.

Courtney Summers is not afraid to tackle taboo subjects. The things we don’t like to talk about, or hope will never happen to anyone we know. How the perpetrators are more often than not people we’d never see as harmful. How guilty and disgusted the victims feel, even though they are the victims. My heart broke about 149304203 million times throughout this book.

Sadie is such an incredible character. First of all, we have a main character with a stutter. It sounds awful to say that I love the fact that we have a main character with a speech disorder, but it’s true. When we talk about diversity, we also need to talk about disability and disorders because so many people are living with them. It’s not realistic to never talk about them at all. I really like how it addressed the way people treated Sadie when they realized she has a stutter. They either think she is stupid, or make fun of it, or start giving out useless and uncalled for advice. We need to call people out on this behavior, because it’s demeaning and disgusting.

“Jesus,” Becki says and I know it’s not because of the inherent sadness of what I’ve just told her, it’s because of the broken way it came out of my mouth. She steps back a little because that shit is catching, you know, and if she gets it, there’s a 100 percent chance she’ll pass it on to her fetus.

After realizing Sadie has a stutter, Becki not only stepped back but immediately assumed Sadie was incapable of doing things like driving.

It’s not the first sorry imitation of myself I’ve ever heard, but I still want to pull his tongue out of his mouth and strangle him with it.

Let’s just say that Sadie was an incredibly interesting character. She has taken care of her sister her entire life, and now she has lost the only purpose she had. She takes control -and revenge. To be honest, reading about her life broke my heart.

Another intriguing aspect were the family dynamics. Sadie is utterly devoted to Mattie, but Courtney Summers also explores the different perspectives and sides of their love. How Sadie sometimes got so mad because of the way Mattie acted, and how sick she was at times of taking care of her. How guilty that made her feel. It also doesn’t portray Mattie as this angel who happened to be murdered, but rather as a real girl.

It explores how everyone has a different view of someone based on the lens they are looking through. Our experiences and biases taint how we see others, and that’s explored more in the podcast part of this novel.

I also found it interesting that they addressed that sometimes we do things that we think are good for others, things that will help them, when in fact they don’t help at all. How we impose our opinion on what’s the right thing to do on others, especially if we are older and can take decisions for them.

I know this book will be on my best books of 2018 list. I know I’ll re-read it at some point to annotate even more than I already have. I was too engrossed in the story at times to take my time and mark pages, so I definitely want to go back to that.

I can’t recommend this book enough. Yes, it will break your heart along the way. But it’s so worth it.