Only three students had access to a teacher’s racy photos before they went viral. There’s Mouse, a brainy overachiever so desperate to escape his father and go to MIT that he would do almost anything, legal or not. Then there’s Drew, the star athlete who can get any girl’s number—and private photos—with his charm but has a history of passing those photos around. And finally there’s Jenna, a good girl turned rebel after her own shocking photos made the rounds at school last year, who is still waiting for justice. All three deny leaking the photos, but someone has to take the fall. This edgy whodunit tackles hot-button issues of sexting and gossip and will have readers tearing through the pages to reach the final reveal.

Listen, I don’t like writing negative reviews on books that haven’t been released yet/review copies. It always makes me feel guilty. But I just couldn’t not write a review for this book. I don’t give 1 star to books often. In fact, I almost never do it. But this book made me so angry I had to stop reading every 2 to 5 pages. It actually managed to give me heartburn, because the anger was riling up my weak stomach.

I want to preface this review by saying I am clearly an outlier on this book. That’s why I was left wondering whether I had read the same book as everyone else had. The early reviews on this are as following: 37 ratings. 12 of those are 5-star ratings and 16 of them 4-star ratings. Clearly, the majority of early readers really enjoyed this book. I hated it. Let’s talk about my reasons as to why.

This book revolves around three students, one of which leaked nude photos of their law teacher. It’s split up into several parts: the ‘today’ when the photos were leaked on Twitter, and then a few other timelines each spanning a week which all take place before said point (like ‘three weeks before’, ‘two weeks before’, etc.).

You’re trying to find out who leaked the photos, as well as how the three students actually got their hands on naked pictures of their teacher. First of all, can I just say EW??

I was hoping this was going to be an empowering read on privacy,  how women are mistreated and the double standard of nudes. And I can’t lie, there were a lot of parts in this book where the author highlighted how messed up the double standard is, and where the characters really called people out on their bullshit. It was going to be the ONE saving grace of this book. Until the ending came. I won’t spoil it for you, but I will say that the ending completely erased the one positive message this book had -at least, in my opinion.

I was so happy to see some things being called out! One of the three students, Jenna, had her own nudes leaked on Twitter as well. This is a conversation she has with the school director (or counselor, I can’t remember):

“No. You chose to ignore the evidence because without Troy and his friends, our basketball team would never have made it to championships.”
“You’re simplifying what happened. You have to understand that those were very serious allegations that could have ruined a boy’s life and destroyed a very promising career before it even got started.”

Jenna really calls him out on his bullshit, and I was so happy to read this. The stereotype of the ‘golden’ and ‘good boy’ makes me sick every single time. That’s how they escape all the consequences, while the victims are the only ones who are left punished.

Yet all the positive messages regarding victim blaming, double standards, and more were completely ruined by the ending of this book. It still makes me angry.

This. This is what made me so angry I wanted to gouge my own eyeballs out with a spoon. I hate EVERY SINGLE PERSON in this book, aside from Jenna’s mom and little brother who aren’t even that present. Let’s look at them one by one.

Mouse, you make me want to punch you in the nuts. Mouse is the ‘nerd’ of the group, the stereotypical smart and unpopular guy. The quiet and shy one with big dreams of going to MIT. He also has feelings for Jenna, who has been his friend for years. And guess what, he is friendzoned. Surprise, surprise.

He constantly complains that Jenna doesn’t see him, and that she should be with a nice guy like him instead of the jocks like Troy and Drew. Barf. First of all, just because you are nice to a woman doesn’t mean that she owes you anything at all. It’s called basic human decency. Second of all, you are NOT a nice guy, Mouse. In fact, you are so far removed from nice that you might as well be another shitstain on the floor. Don’t even get me started on the way he kissed her without her consent at a party, after which she pushed him away, and he tried again because if he only tried again she would see that they were perfect for each other. Great, sexual assault. Wonderful.

The things he does to Jenna… I can’t even comprehend. And how after all that he still thinks he is a nice guy??? Are you delusional, mate???

And once again, I will say that an abusive home does not excuse your horrid behavior. Yes, his situation is horrible. But that doesn’t excuse your actions at all!

I can’t talk about him anymore, because I will pop a blood vessel if I keep going.

Another person I want to strangle, for multiple reasons. Another shitstain on the surface of humanity. Let me tell you why.

First, he thinks it’s a game to collect as many nudes from girls from his high school as possible. It makes him feel accomplished. So he has nudes of more than 30 girls from his high school (probably underage, even though I think he is underage as well). THAT IS SO DISGUSTING, I CAN’T EVEN DEAL. And he doesn’t even learn anything throughout this book. He’s like, “Oh, it’s awful for Jenna that her nudes got leaked. I’ll delete hers from my phone, but I’ll keep the others’ because I just like to know they’re there.” What the actual flying fuck.

Then his little sister talks to him about it. About how other girls have told her that her brother is someone they have to be careful of, that he asks for inappropriate pictures. His little sister asks him about it. Then he says that she should be careful of men because they don’t have good intentions. That men don’t respect girls who send pictures like that. That he never asked for them. Are you fucking serious??? Yes, you did! You manipulated those girls until they sent you a picture, and now you’re blaming them?

Drew also plays on the basketball team of the school. At some point, Troy (the captain, I think) doesn’t pass to him but to another guy because Drew had been missing shots the past few weeks. Afterwards in the locker room, he confronts Troy and tells him that he needs Troy to believe in him, and he says the following:

“Do you have any idea how hard it is to be the only white guy on the team, constantly battling for respect?”

And of course, Drew also comes from a rich family. At some point, he comes to Jenna’s place of work to talk to her. He then says that ‘it must be nice to have a job and all that responsibility’ and that he wishes he could experience it too. Are you shitting me? She doesn’t work there because she loves it. She works there because some people actually need the money!

“You’ve never had a job, have you?”
He shakes his head, looking sheepish. “Nah. My parents want me to focus on school and sports.”
“Must be nice,” I mutter.
“Not really,” he says, clueless. “I’d love to have a job like this.”

Marginally less of a shitstain than the other two, but still a shitstain. Listen, I liked the way she called people out on their bullshit. The way she didn’t let anyone walk over her, or treat her in this horrible manner because of her leaked photos. But guess what? She is still a bad person! As is pretty much everyone else in this book.

I just… I can’t deal anymore.

Miss Bailey is the teacher whose nudes were leaked through Twitter. In general, I just felt bad for her. I also think she’s not a good teacher, and that she treated people terribly. Still, that doesn’t mean she deserves to have something so private put out there.

I just can’t deal with this book. I don’t understand how this book’s average rating on Goodreads is so high. Did I read the same book as everyone else did? Anyway, go check out their reviews on Goodreads if you want to see a different perspective on this book! For some fun, here are my Goodreads updates while reading. There are far more of them than usual because I just needed to vent while reading (start from the bottom). 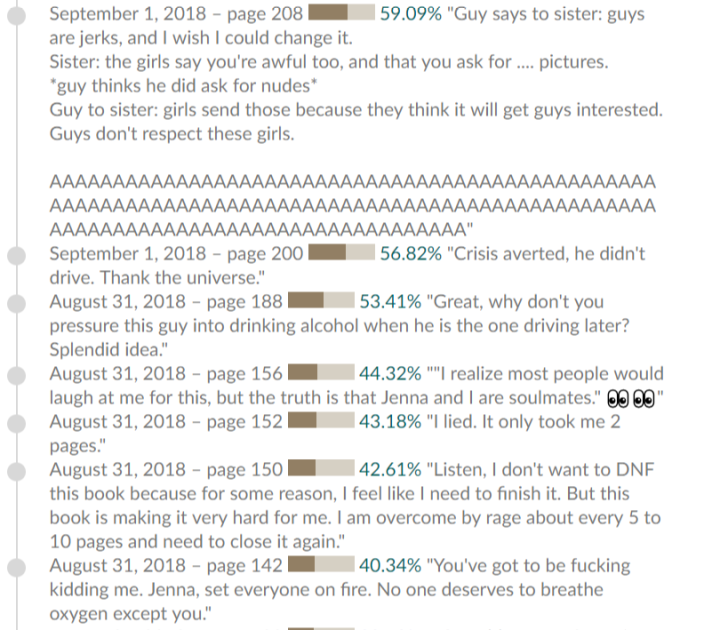 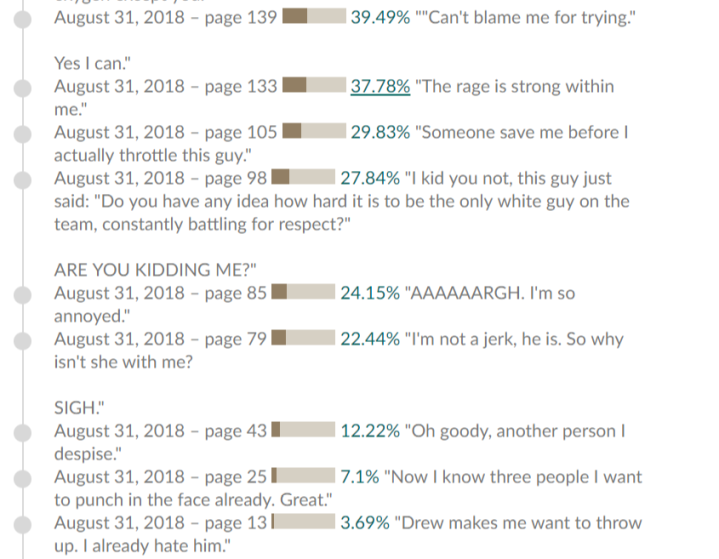 10 thoughts on “Easy Prey review | did I read the same book as everyone else?”