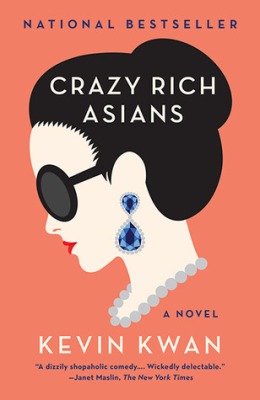 When New Yorker Rachel Chu agrees to spend the summer in Singapore with her boyfriend, Nicholas Young, she envisions a humble family home and quality time with the man she hopes to marry. But Nick has failed to give his girlfriend a few key details. One, that his childhood home looks like a palace; two, that he grew up riding in more private planes than cars; and three, that he just happens to be the country’s most eligible bachelor.

On Nick’s arm, Rachel may as well have a target on her back the second she steps off the plane, and soon, her relaxed vacation turns into an obstacle course of old money, new money, nosy relatives, and scheming social climbers.

I finally did it, I read Crazy Rich Asians. I’ve wanted to read this ever since I learned of its existence, when the movie was announced last year. It was pitched as an adult version of Gossip Girl with an entirely Asian cast of characters set in Singapore, which sounds epic to me. I must admit, the pitch is pretty accurate. I’m so glad I finally read this book, because it was everything I wanted! I can’t wait to watch the movie in theaters (before any of you comment on this, I live in Belgium where the movie wasn’t released until October – I’ll take the first opportunity I have to go and support it).

This is the story of Nicholas Young and Rachel Chu, who have been dating for 2 years and are living together in New York City. They are both professors, which is actually how they met. The story starts when Nick asks Rachel to spend the summer with him in Singapore, so they can attend his best friend’s wedding together. That means Rachel will be meeting Nick’s family for the first time. She doesn’t really know anything about them, because Nick tends to evade answering questions about his family.

The twist? Nick comes from one of the richest families in Singapore, which means one of the richest families in the entire world. He grew up in a circle of rich and elite families, and was brought up with quite some privilege. When the news spreads that Nick is taking a girl home, his family immediately starts investigating, and the gossip takes off.

We follow Rachel and Nick as they travel to Singapore, as she discovers how wealthy Nick truly is, and as his family tries to break them up. I really loved this story. Because it was told from different perspectives, and doesn’t only include Rachel & Nick’s life in Singapore, it wasn’t boring for a second.

I listened to the audiobook of Crazy Rich Asians, which I would highly recommend. I flew through this because I increased the speed to 1.5 and 1.8 (switching between those from time to time), and it felt like this book was finished in no time. I had a blast while reading, and found myself laughing out loud multiple times.

The characters are definitely the most important part of this novel, as it’s all about their lives. At first, I was afraid I wouldn’t be able to tell people apart due to the amount of characters and the fact that I was listening to an audiobook, but I needn’t have worried. It was easy to distinguish between the characters (especially the PoV ones) because they’re all fully fleshed out and intriguing.

I do wish I would have had my physical copy with me while listening to this book, because it would’ve been nice to see the family trees every once in a while. These families are very large and complicated, and I sometimes lost track of who was related to who.

Let’s talk about the stars of the show: Rachel and Nick. While I really enjoyed reading about their relationship and life, they weren’t the most interesting characters to me. I loved that Rachel is incredibly smart and career-oriented. I loved how much she cared for Nick, and how she wants him to be happy. I adored her relationship with her mom. The same goes for Nick (aside from the mom bit). I do feel like Rachel and Nick are pretty much the same people: educated, smart, independent, direct, and naive at times. Rachel was very naive at the beginning, and I can’t believe Nick thought that everything would be fine when they went to Singapore without telling Rachel anything about his family.

My favorite character by far was Astrid. There is just something about her spirit I really connected with. Like Nick, she grew up in an incredibly rich family. She is used to being on her own, and has learned to use the family money for things she adores, yet not flaunt it in the same ways others do. I certainly don’t agree with all her choices, but that doesn’t make her any less intriguing to me. The only thing I will say is that the advice she was given at the end of the book? No, girl, don’t do that!

Probably one of the most entertaining PoV’s was that of Nick’s mother, Eleanor Young. She is vehemently against Nick’s relationship with Rachel, as she doesn’t come from a good (read: old money) family. I can’t say I agree with anything she does throughout this book, but I do sort of understand where she comes from. She’s his mom, and she wants what she believes to be best for him.

There were many other fantastic characters (Kitty), and many others you basically want to murder (Eddy). Yet I was somehow invested in everyone’s life, no matter how small their role in the story really was.

I had such a great time listening to this book. I fell in love with most of the characters, and enjoyed every minute I read of their lives. This book was exactly what I wanted: fun, hilarious, outrageous and ridiculous. I can’t wait to see what the author has in store for these characters next, and I’m so excited to watch the movie.