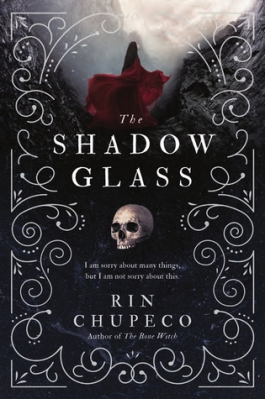 I won’t provide a synopsis because this is the third book in the trilogy and would contain spoilers for the previous instalments. If you want to read the premise of The Shadowglass, you can click on the title above or the cover, which will take you to the Goodreads page.

My review on the first book, The Bone Witch.

The Shadow Glass was one of my most anticipated releases of 2019, and one of the only books I pre-ordered. I’ve been in love with this trilogy ever since receiving an e-ARC of the first book in 2016. I was both excited and scared to read this conclusion, because it would wrap up one of my favorite stories. Would it be a good ending? I’m happy to say that I wasn’t disappointed by this book at all.

Obviously, I can’t say much (or anything at all really) about the plot or storyline of the book because it would spoil the events of the previous two novels. I’ll keep it very general and abstract for you.

I absolutely love the twists and turns in this story. Throughout this entire trilogy, I found myself doubting every character and interaction. I didn’t know who to trust, much like Tea doesn’t know who she can rely on. I was taken by surprise multiple times throughout this book, which doesn’t happen all that often anymore. It was a wild ride, and I even shed a few tears at some point.

That is the nature of tyranny, young Tea. Maintaining power is their sole intention. Why worry about retaliation and revolution when they have always intended to wield the sword?

What makes this trilogy stand out to me are the characters. They’re all so well-developed, given their own time, and have their strengths and flaws.

Tea is a badass woman, but she isn’t infallible either.

“We all admired her, Knox.” Lord Besserly raised his glass. “Let’s raise our glasses to the Dark asha. As strong and mighty as we are, able warriors one and all – may nothing we do piss her off.”

She’s way too impulsive and emotional at times, which leads to rash decision making. The great part is that she’s very aware of her personality flaws and they don’t overtake the story – if that makes sense. Love, family, and friendship are incredibly important to her, which shows in the way she treats her friends. She’d do absolutely anything for them. While she has a strong sense of duty, she won’t let it overshadow her humanity, or her as a person.

“I am selfish. I am not the compassionate woman she is. Sometimes I feel she is far too kind for her own good. I will serve the kingdoms, but not at the cost of my health.”

Another character I want to bundle up in a blanket and protect forever is Likh. In the entire trilogy, we’ve seen how fluid gender is through Likh’s story. While the rest of the world considers Likh a boy, she has always been drawn to the asha (female witches) over the Deathseekers (males capable of drawing runes and magic). Likh loves the intricate hua of the asha, the way they perform and carry themselves. In The Shadowglass, we see Likh realize which pronouns actually fit her and how she explains it to the others. Seeing this transition, this realization and acceptance, was wonderful.

Aside from gender, there’s also diversity in terms of sexuality. There’s an f/f relationship I absolutely adore, but I feel is more prominent in the second book rather than the third. There’s a male character who is primarily attracted to other men as well.

If you haven’t read this trilogy yet, please give it a try. I promise it’s worth your time. I’m so happy to say that this Asian-inspired fantasy series written by a Filipino author belongs on my favorites shelf.

2 thoughts on “review: the shadowglass, the conclusion to one of my favorite fantasy trilogies”