As you may know, every month I write a post on all the movies and TV shows I watched, the music I listened to, and the things I did in the past month. Let’s see what my life in June looked like! 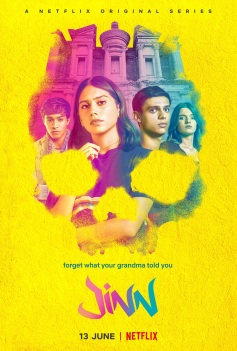 One of the shows I watched in June was Jinn, the new Arabic Netflix Original. I binge-watched the whole thing, which isn’t that much of a feat since there are only 5 episodes or so. It was a fun time, but I’ve heard quite a lot of criticism on it already. Obviously, it was very dramatic and over the top at times, since it’s a TV show about teenagers. However, I’ve heard people say that the dialogue is really off, and that no one actually talks like that (which is something I would have never noticed, as I cannot speak the language).

I also finished watching La Casa de Papel, in preparation for the new season coming in July. I adore this show. It has become one of my absolute favorites, and I find myself glued to the screen whenever I’m watching it. I can’t wait to see what the writers have in store for us next.

I also watched Always Be My Maybe, a new Netflix movie everyone has been loving. It was so cute! I loved Ali Wong in this film, she did such an incredible job at portraying her character. One of my favorite parts of this movie is how important her career is to her, and how she isn’t willing to give that up because of love. It’s such an important message! The only thing that prevented me from giving this 5 stars is Randall Park. I didn’t love his acting, to be honest. At times, it felt like he wasn’t taking this movie seriously? I’m not sure whether that was the point of the character or not, but it made me feel odd.

Buckle up, because June was a wild ride.

The first weekend of June, I traveled to London to see BTS perform at Wembley Stadium. It was one of the best concerts I have ever seen, if not the best. I can’t even describe it properly. Here’s a little video I took of the crowd!

So blessed to have been able to witness this 💜 Thank you, BTS, for the incredible performance I will never forget. See you next year! #btsatwembley

A week or two later, I also saw Eric Nam in concert in Brussels! He was a fantastic performer. His voice is out of this world, and he’s way funnier than I ever realized.

Lastly, I bought tickets to see Stray Kids in Berlin in August! I can’t wait, as they’re one of my top 3 groups.

In June, I rediscovered my love for dance workouts and pilates. I had to stop doing them for the past two weeks because it’s been more than 30°C in Belgium and my apartment is an oven, but I’m excited to start a workout routine again.

A few days ago, I also watched my little cousin graduate high school. I’m so proud of her!

A.C.E – Under Cover
I know what you’re thinking. Didn’t I talk about this song in last month’s wrap up? Yes, I did! However, I still can’t stop listening to it and thus it deserved another mention.

ONE OK ROCK – Stand Out Fit In
Last month, Lindsey talked about ONE OK ROCK in her monthly wrap up. Since we usually love similar music, I decided to give them a try. I then continued to fall in love with them and have listened to their latest album on repeat.

Stray Kids – Side Effects
For the first time since falling in love with Stray Kids, I’ve had to listen to one of their songs on repeat before I could really get into it. It’s so different, yet so Stray Kids at the same time. I’m enjoying the song, but have to admit it’s not my favorite comeback so far.

ONE OK ROCK – Eye of the Storm
Like I mentioned before, I’ve been listening to this album on repeat.

Taylor Swift – You Need to Calm Down
I can’t stop singing along to this song! Someone help me!!

JK – Euphoria
I adore this song, but this new version of memories of JK made by the members just kills me.

What did you do in June?

8 thoughts on “June in the life, a personal wrap up”