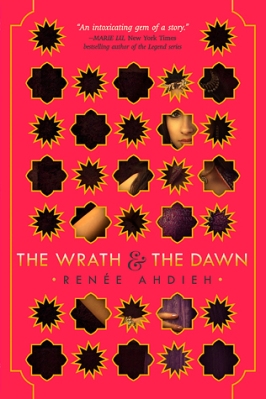 In a land ruled by a murderous boy-king, each dawn brings heartache to a new family. Khalid, the eighteen-year-old Caliph of Khorasan, is a monster. Each night he takes a new bride only to have a silk cord wrapped around her throat come morning. When sixteen-year-old Shahrzad’s dearest friend falls victim to Khalid, Shahrzad vows vengeance and volunteers to be his next bride. Shahrzad is determined not only to stay alive, but to end the caliph’s reign of terror once and for all.

Night after night, Shahrzad beguiles Khalid, weaving stories that enchant, ensuring her survival, though she knows each dawn could be her last.

The Wrath and the Dawn had been on my to-read list since its release in 2015. It was one of the most hyped book in the bookish community at the time, and as always, the hype scared me. I kept putting it off because I didn’t want to end up disappointed. High expectations can really kill a reading experience, which seems rather unfair to the novel. After about 4 years and seeing some mixed reviews pop up, I decided it was finally time to read it. Unfortunately, I still found it to be a disappointing read.

The premise makes it seem like an epic read. Shahrzad volunteers to be the King’s wife, even though he kills them come morning. One of his past brides that was killed was Shahrzad’s best friend, and she is determined to get revenge. Doesn’t that sound incredible?

Unfortunately, this book fell flat for me. Shahrzad hates the king (obviously), who has killed countless of women after marrying them – including her best friend. This level of hatred, these things he has done, you cannot overcome. What I wanted from this book was a revenge story. Yet only a few days after she comes to the palace (I can’t exactly remember how long it took), Shahrzad begins to waver. She starts to notice how handsome the king is, and just doesn’t understand how he could have done such monstrous things. Because we all know attractive people are inherently nice… With every little tiny act of kindness, she proclaims he can’t be a monster after all.

Listen, girl. Killers aren’t going on a rampage every single second. A person can be perfectly charming and kind, and still murder others. They are not mutually exclusive! I hated how fast she gave up on hating him, how their “love” story developed in .2 seconds, and how she seemed to forgive him for everything. I just couldn’t deal.

Let’s be honest, this was a case of insta-love. She hated him, sure. However, after being kind of nice to her for 2 days, she was ready to throw it all away to be with him. I found myself rolling my eyes for the majority of the book, because it just seemed so unrealistic and ridiculous to me.

Of course, I knew there would be a romance in this story, an enemies-to-lovers one. I didn’t expect it to develop so fast though. That took me out of the story, and made me genuinely disinterested in reading it.

For the life of me, I can’t remember what happened in this novel aside from the romance between the two main characters. The only other person I can recall is Tariq, a character I actually enjoyed. He should have ended up with the girl, in my opinion. I guess that could still happen, because I haven’t read the sequel, but I highly doubt it.

Lastly, let’s talk about the reveal on why Khalid kills his brides every morning. Obviously, I won’t spoil what the big secret is, in case you haven’t read it. When I came across the reveal, I honestly couldn’t believe it. It made me so angry, to be honest. If you’ve read this book come talk to me on Twitter in the DMs, because I need to discuss this with you all. To me, this was such an obvious ploy to make Khalid seem more likeable, and I hated it.

All in all, this book just wasn’t for me. The romance killed what could have been an epic read for me. I simply lost interest in the story, and won’t pick up the sequel.

7 thoughts on “review: the wrath and the dawn”